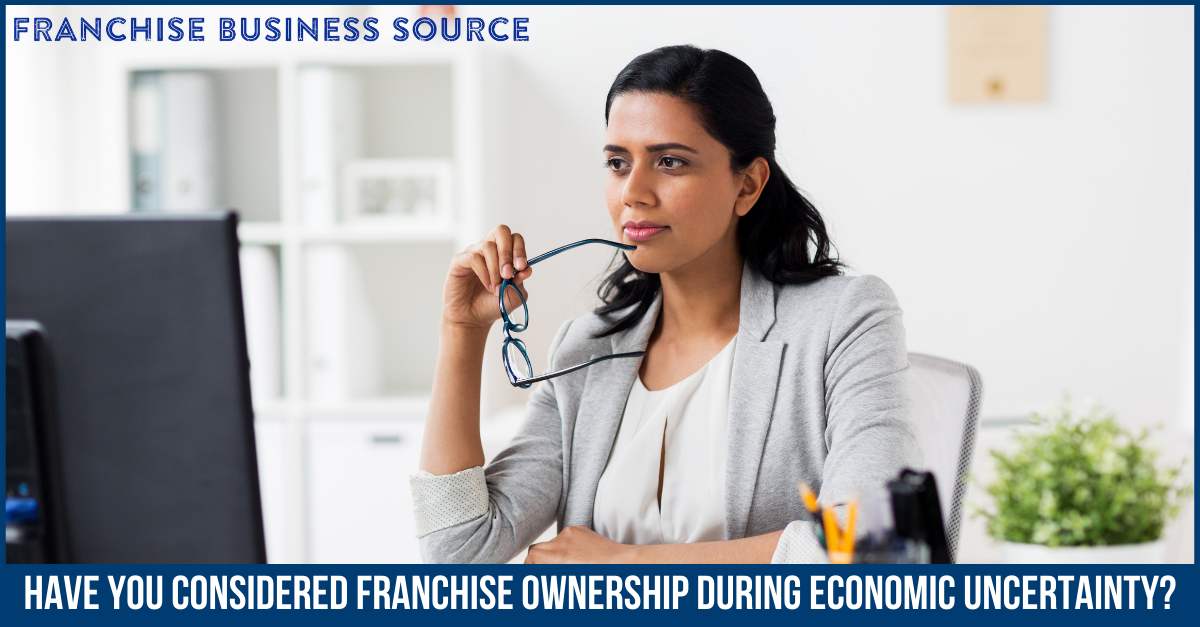 Have You Considered Franchise Ownership During Economic Uncertainty?

In a similar report[2] published the following year, PricewaterhouseCoopers estimated the 2009 decline in franchise establishments was only 0.1 percent versus the predicted decline of 1.2 percent. They believed 2010 would see a 2.0 percent increase as the economy pulled out of the recession that started in December 2007.

That was an 85 percent confidence in their business performance despite economic uncertainty!

Why Now is the Time to Evaluate Franchise Ownership

In their January 2009 report, PricewaterhouseCoopers found that many franchisors were handling the 2008 economic slump by reducing budgets, strictly managing overhead costs and applying other tactics.

This activity suggests pragmatism, not pessimism, about the future. Franchisors still believed “…the entrepreneurial spirit of franchisees and the fundamentals of the franchise business model…” would help them endure the economic downturn.

People who were fearful about becoming franchise owners in 2008 and 2009 missed the boat. They sat on the sidelines waiting for an economic upturn. But when it occurred, their competitors had already evaluated and started franchise businesses.

During this current global crisis, I’m seeing a surge in opportunity-seekers similar to 2008 and 2009. Current and prospective franchise owners are optimistic about a quick turnaround in growth, especially as they witness the innovation, nimbleness and support of franchisors.

How To Know You’re Ready For Franchise Ownership

When the economy is doing well, people are content in their current job. They believe they can be hired easily and quickly if they decide to leave their company or if they’re laid off.

But when the economy becomes volatile, people start to evaluate their career and ask themselves questions:

If you’re asking yourself these and similar questions, consider franchise ownership. Especially if you see yourself as a leader wanting to meet customer needs, manage employees as valued contributors, and give back to the community.

As fear consumes the decision-making processes of wannabe entrepreneurs in the coming weeks and months, you can start an active evaluation now to understand what it means to own and operate a franchise.

Avoid the rush to start a business as more and more people see the opportunity of investing in a franchise as the government stimulus gains momentum and they feel increasingly secure about the economy.

By the time the people sticking to the sidelines decide it’s safe enough to look at franchise ownership, you will have moved from startup phase to growth phase. You will be the entrepreneur with loyal consumers, making it difficult for latecomers to take away your market share.

Partner With a Franchise Consultant To Evaluate Franchise Ownership

Instead of looking at franchise businesses that sound interesting, talk with a franchise consultant, like me, to determine if the underlying model meets your vision of yourself as a business owner and to recognize where your skills fit into operating a business in general.

Understand what it takes for you to launch and sustain a new business. Establish a goal for your life as an entrepreneur. How else will you know when it’s the right time to make the leap financially if you don’t know where you need to land personally?

So, begin your evaluation of franchise ownership by calling me, Jeri Lucco, at 614-768-3884 for a free, no-obligation discussion.

Ready to get started? Schedule a Free Initial Consultation

Ready to Get Started?